Thank you for playing the early version of one of our boss battles! We are currently running a campaign to support the development of this game. Crowdfunding Campaign

The having to press left click to go into aim mode before hitting right click to shoot really destroys the flow of combat and makes this game nearly unplayable. You seem to be trying to go for a cup head thing so maybe allow multidirectional shooting as well for when you are moving. The loading screen that happens for the dialogue and then for the boss fight also breaks up the game play too much and makes it so there is at least 13 seconds between dying and getting back into the game which can really ware down on a player.
I recommend having the dialogue happen in the same unity scene and disable the script, then when the 3,2,1 counts down enable the player's script.
You also use allot of clip art here which is frowned upon in most art based communities (such as game making) for the inconsistent effects it makes on the over all art style. Lastly the "I will fork you" pun barely works the first time, I recommend making a multitude of phrases and using unity's random function to have a random one be pulled up. 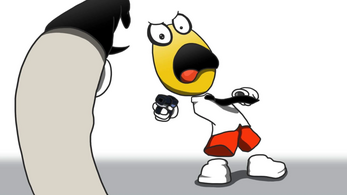